You better believe I came up with that catchy title myself!

Anyway, I’m sitting here over a hot bowl of pho.  It’s not the first time I’ve done this since returning from Vietnam, and it surely won’t be the last.  The food in Vietnam is a never-ending gastronomic adventure that I’m doing my best to replicate at home. I wish I could tell you about all the things I ate, but the truth is that I didn’t even know what they were most of the time.  Regardless, they tasted amazing.  Even weasel coffee, made from coffee beans specially processed through the gut of a weasel!  Can’t wait to send that home to the fam!

I know I should go into detail about my travels in Vietnam, and I would love to, but I hardly think I did the country justice in my short visit.  As I always seem to do, I underestimated both the size of the country, and my desire to see all of it.  As I’ve said many times over, travel is such a refreshment for the soul – it awakens your mind and body, and reminds you of the breadth and depth of humanity.  There never seems to be enough time for travel.

Rather than go into detail about what I did and saw in the country, I’m just going to share some vignettes and observations from my time there.  I didn’t travel with a detailed enough itinerary or plan to be of use to anyone else in planning, and I didn’t take notes on what I did.  But, I can tell you my thoughts because I have plenty of those.

One of the most surprising things about Vietnam to me, was not the motorbikes, or the crush of people, or the smells of food and streets and exhaust, as many people described to me.  My mind was more fixated on the layers of culture that permeate the Vietnamese world.  As you walk the streets you see pate, french breads, and other foods whose stay has long outlasted the French rule.  You see colonial architecture next to soviet-style, socialist government buildings.  You see countless reminders of the “War of American Aggression”  or the Vietnam War, whether in museums, or in the form of someone wheeling themselves down the sidewalk in a cart because they have deformed legs due to the toxic chemicals sprayed across swaths of Vietnam during the war. You see women carrying their wares, or other goods on carrying poles and wearing the traditional Non la hats, next to teenagers on their iphones.   It’s a wild array of contrasts.

Most of all, I was struck by the persistent thrum of Vietnamese society despite all the occupations, wars, and turmoil.  I was stuck by the grassroots victory of capitalism in a country that fought so hard for socialism, and intrigued by the tangible sense of economic acceleration that I felt both in the cities and in the outlying areas.

I think part of the reason I so enjoyed the country was the company I kept, and the timing.  Having just gotten engaged a week before, my brain was full of emotions and my heart felt like it was on overdrive. It felt odd to leave on a vacation without Rick during this time, but the plans were made months earlier. So, I picked up in the throes of giddy wedding planning (and more importantly, life planning) and spent a week with one of my ex’s best friends.  It felt a bit ass-backwards and it freaked me out.  In fact, I took so long saying goodbye to Rick that I nearly missed my plane! 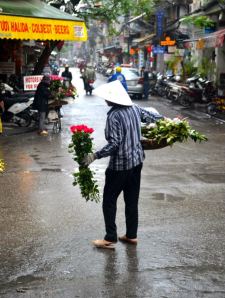 That nervousness proved unfounded, because Eliot and I have always gotten along like two peas in a pod.  He read the maps, I perused the internet on his cell phone.  He suggested ideas, and I said yes or no to them. He shared his mangoes, and I shared my antacids.  He paid for my custom suit, all my flights, and a few hotels, and I paid for the 6-hour bus ride where he nearly got motion sick and an overnight boat where he narrowly avoided singing karaoke.   You can see how we work together well.

I kid.  There was much more than that.  I also let Eliot wear my scarves in cold air conditioning.

But, seriously, Eliot made me feel like someone was watching out for me while we  traveled, and was a great companion for the week.  We talked and talked and talked some more, and we drank coffee, picked out baby gifts, tried on clothes, ate incessantly, rode bikes, dodged motorbikes, and generally had a great time.  Traveling with him is sort of what I imagine it would be like traveling with a brother; comfortable, engaging, flexible.  We could do what we wanted; at times we split up, or one of us went to bed, but there was never any drama.   It was a perfect fit.  And though travelling with Eliot reminded me of the past, it also brought back a lot of wonderful memories and made me smile.  As soon as I was on the plane to Kuala Lumpur by myself, I missed having Eliot sitting next to me reading magazines and acting impatient.  The kid is just wonderful. 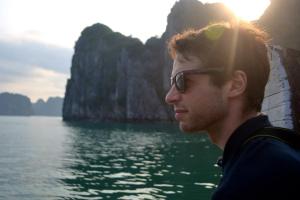 It was definitely a bit odd taking off to travel with Eliot, given the myriad associations that I attach to him, and the timing of my trip just a week after Rick and I got engaged.  But, oddly, traveling with Eliot gave me a lot of mental space to recall who I was in college and who I am now, and reconcile the differences. I relish my time with him because I have never had such a close guy friend in my life.  I have no brothers, or close male family members near to my age. I have been surrounded by women my whole life, so I’ve had few chances to share a close friendship with a guy that didn’t suffer from sexual tension and miscommunications.   I just soak it in with Eliot.   He is the only guy I have even felt so uninhibited around that I wasn’t dating.

As such, he was party to all my ramblings about all the stuff tumbling through my head, and he listened and gave advice as someone who has known me well for a long time. Whether  it was life advice, or determining which fabric to use for my suit, he was on it – it wasn’t his first rodeo, in that sense.  It was so nice to talk with him, hear his thoughts, and remember how much I like Eliot.  He doesn’t begrudge my ridiculousness, and I never feel like I have to put on airs around him.  He even was sweet enough to tell me I’d be a pretty bride when I showed him a picture of a white dress I’d tried on while I was wandering around the city on my own.  It was a joy traveling with him.

The trip to Vietnam, for all these reasons, was incredible.  All the things about the trip that initially made me nervous like leaving Rick when we were so happy, seeing Eliot and dealing with the related associations, etc., were EXACTLY what I needed at that moment in time.  It really felt like the pieces all fell into place for a reason.  Being away from Rick reminded me of how much I care about him, how much I miss him when we’re apart, and how I enjoy being with him.   Being around Eliot helped me process some unresolved things from the past few tumultuous years, and reminded me of the road I’ve traveled to this point today.  It was an amazing trip and I’m so grateful that all the pieces fell into place to make it what it was.  Vietnam is an incredible country and I hope to return.